Driffield Tigers 3 v 0 Goal Sports
After several failed attempts the weather and opponents finally came together to give Goal Sports their third match of the season.

A much changed an inexperienced Goal Sports came together to take on Drypool League Champions; - Driffield Tigers at Allotment Lane, Driffield.

The first period kicked off with some Goal Sports players playing 11 a side football for the first time, not only that but playing in new positions.

Captain Alistair Jacques was leading the back line by example by encouraging and making sure his team mates were picking up their men. Driffield started the stronger of the two sides as they pressed forward early only to see Martindale and Jacques repel their attacks with great help from their defensive colleagues Smith and Jackson.

It didn’t take long for the first goal to come as Goal Sports were under the cosh as they failed to keep possession, most probably due to pre match nerves as they just about managed to shuffle the ball clear for a corner. On the second attempt the ball flashed across Liam Fearnleys goal and looked set to be cleared when a sliced clearance fell to Matt Busfield for the Tigers  and he slotted home to give his team an early lead.

The goal seemed to finally get the Goal Sports boys going and kicked them into gear as they now began to pass the ball on the deck and play some good stuff. Jordan Fraser began to stamp his authority on the midfield with a great shimmy and through ball to launch a Goal Sports attack. Tom Whitfield carried on where he left off from the last two Goal Sports games by dominating anything that came his way and showing a great awareness of his team mate’s positions with his passing. The two centre midfielders began to pick out their passes and the other Goal Sports players began to follow suit, suddenly Connor Finch on the left and James Twinn upfront began to play with confidence and take the game to Driffield. Goal Sports finished the half with a belief that they could in fact pick something up from the game as Leslie tested the Tigers keeper from just outside the box.

During the first break a few tactical changes were made to the side as Dan Twinn came in at centre back and Jack Martindale moved forward in to the midfield engine room, his favoured position. Ben Glover also joined the match upfront with Joseph Leslie.

The changes made an instant impact, just as they finished the first period the Goal Sports boys started the second by impressing with some brilliant football, again stemming from the midfield with Whitfield breaking up attacks and feeding his team mates. Jack Martindale was quick to get in on the act as he skipped a couple of challenges as he took the game to Driffield in his new position only to be fouled in full flight. The best move of the match came with a flowing one and two touch move down the Goal Sports left side as Finch, J Twinn, Whitfield, Martindale all combined to release Leslie in attack, unfortunately he was quickly ushered away from goal as he entered the box and the attack came to nothing.

A pattern was beginning to set on the match as Goal Sports looked so much more comfortable with the ball than they did in the early stages, as they moved it from the back, through midfield and to the final third. The final pass or controlled touch just seemed to be missing but the ideas and effort was never in question. James Twinn was showing a real improvement on the ball the longer the game went on as his quick feet down the left wing won a number of threatening throws. Martindale and Whitfield looked in control in the middle, Jacques had forged a great understanding with Dan Twinn at the back and it looked like it would be the Tangerines of Goal Sports who would be next to strike when suddenly……

Driffield Tigers attacked down the Goal Sports left and Dinsdale fired over a cross come shot towards the centre. Jacques reacted quickly to try to head the ball only to see it spin so unluckily in to the back of the net, there was very little he could do about it, a real freak goal. The luck just didn’t seem to be on Goal Sports side.

During the final interval team talk team manager Mark decided at 2-0 down it was time for a change of shape. The Goal Sports team came out in a new 433 formation and also having picked up a new player, Javeleau from the Tigers. Javeleau replaced Leslie upfront as he now became a Tigers player and Goal Sports lined up with the ever versatile and energetic Keir Smith in his 3rd position of the day, centre midfield.

Once again Goal Sports came out fighting as they pressed for a goal which nobody could have grumbled at if it had came, they really deserved one, if not more!.

Fraser and Smith combined to release James Watson over the top. Watson found himself outpacing and out muscling the Tigers back line but approaching goal on his weaker left foot, with cries of “Shoot”, Watson fooled everybody by throwing a fantastic faked left foot shot and turning on to his right foot and hammering a shot at goal which was well saved. More pressure was to follow as the whole team upped their game. Ben Glover was unlucky with a quick fire effort at a tight angle which was saved by the keeper. A cross from the right side almost found a Goal Sports player in the centre as once again lady luck proved to be on the Tigers side and the bounce took it through to the goal keeper.

The final blow came 5 minutes before the end as Joseph Leslie, who had started the match playing for Goal Sports, drove through the midfield and through the Goal Sports back line and finished in composed style to settle the game at 3-0. A series of Driffield Tigers corners finished the game as Goal Sports struggled to pick themselves up.

On another day this could quite easily have been a reverse score and should have been closer than the 3-0 defeat suggests. By the end of the game the boys showed they could come together once again and put up a top performance against a team of Champions and have them worried for large amounts of the game.

A great effort in tough conditions, it is hard coming together and being asked to play in new positions and with new boys that have never played together before. To play the way Goal Sports did after the first 5 minutes was a real credit to the quality of the boys.

Well Done and lets start like that in the next game!

Man of the Match; - Alistair Jacques. Alistair showed real composure on the ball whilst leading from defence. A real top quality performance from the centre back, by once again reading the game well and winning the ball repeatedly with some fantastic timed tackles.

A special mention must also go to Whitfield and Martindale who could quite easily have won the award with inspirational performances of their own. 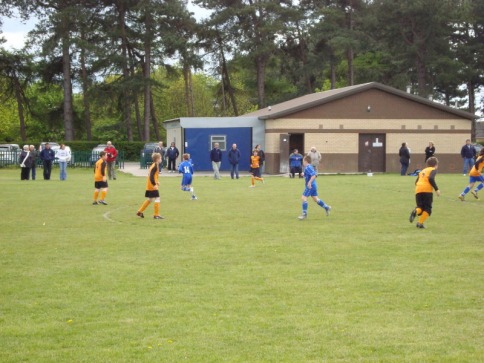